Junior Councilperson Garrett Foy was recognized for his service during the 2018-2019 school year at the May 20th Borough Council Meeting.  Chris Cap, Executive Director of the Pennsylvania State Association of Boroughs (PSAB) in Harrisburg, visited Morrisville Borough to officially recognize Garrett Foy for serving in the Junior Councilperson program during the 2018-2019 school year.  Garrett was joined by his parents for the presentation. 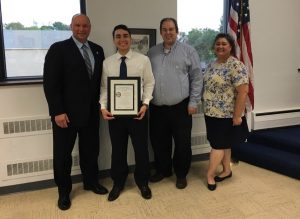